By Mary Ann Scaffidi
The Heiser organization was co-founded in 1917 by Walter Heiser. The original dwelling, located on 7th and Wisconsin Avenue, sold Model T Fords for $345. People traded in their carriages, wagons, even horses towards the purchase of their first car. The dealership moved briefly to Lisbon Ave. before settling in 1932 on North and Prospect Avenues.

In 1938, Mr. Walter Andrews came on with Heiser as the General Manager, and was a key to the company's continued success. During the three years before World War II, Heiser was responsible for one quarter of Milwaukee Ford sales.

Heiser earned a reputation of integrity during the post-war vehicle shortage. Heiser maintained a strict “first come, first served” delivery list, which was not easy to adhere to. When mass production resumed and vehicles were plentiful, customers remained loyal. 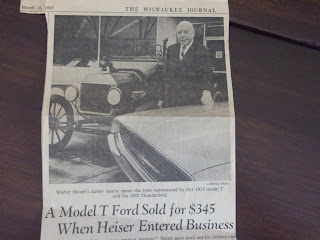 Sam Scaffidi was hired at Heiser in 1955 as a salesperson by Phil Tolkan, who was was the Used Car Manager. In fact, he had applied for the job a year earlier, but Tolkan wouldn't hire him because he lacked experience. So, Scaffidi went out and found the toughest sales job he could - selling vacuum cleaners -  and was a success. After selling vacuums for one year to the day, he went back to Heiser. Tolkan, having heard about his success, hired him.

In 1973, Walter Heiser retired. Scaffidi, who was then the Used Car Manager, purchased the company's stock with the help of the Office Manager, the late Milton Berdelman, and the Sales Manager and son of the founder, William Heiser. 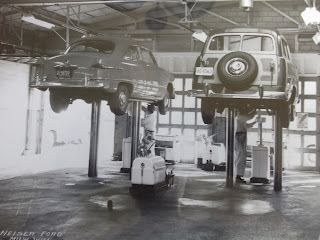 In 1977, Heiser bought Falls Lincoln-Mercury in Menomonee Falls. It was unusual for Ford Motor Company to allow one dealer to have two franchises in the same city, but Scaffidi persisted, and it paid off.

In 2002, Heiser Ford built a new building and moved to Silver Spring Dr. and Green Bay Rd in Glendale, Wisconsin. 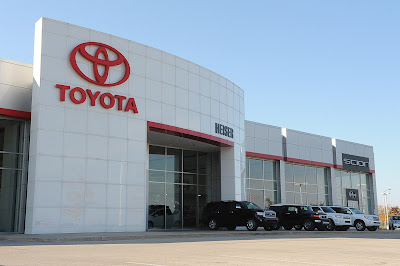 In 2008, Northpoint Ford moved into the old Heiser Toyota building on 76th Street and the Corporate and Central Offices relocated to Heiser Ford in Glendale. 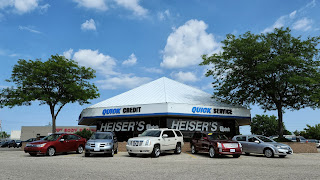 Since then, Heiser has won numerous awards - including the Toyota President's Award, Shepherd Express' Best Domestic Auto Dealership award, the Lincoln President's Award, and we were even named the #1 Lincoln Certified Pre-Owned dealership in the state.

Samantha Delivers Service with a Smile! One of the things that make a company great is its people. This month,  +Heiser Toyota  is thrilled to highlight a Service Advisor that lights up the room with her smile and positive attitude: Samantha Jezwinski.   Samantha is one of our most appreciated workers, and her reviews reflect it:    ﻿ Heiser Toyota Service Advisor: Samantha Jezwinski “ She took the time to help me understand what was covered in my Care Plus Package, and for how long. For that she gets FIVE STARS from me! I really like the focus she had on helping me as a customer and her no-pressure attitude. The excellent service we received from her will keep us as Heiser customers for a long time. ” Samantha enjoys the direct contact she has with Heiser Toyota’s service customers.   Many feel confident about the work we do because of the care she takes in explaining the recommended work.   In the 5 months she has been in her position, Samantha has become a favorite
Read more

One of the things I enjoy about being a part of Heiser Automotive Group is that I get to meet many wonderful people in the community. Recently I had the opportunity to award the Heiser Preps Plus scholarship to Emily Peterson of Nathan Hale High School, and Kyle Manske of Wauwatosa East High School. These two young adults have many accomplishments and I am honored to have had the opportunity to have met them and to have Heiser help them further their educations.   These two winners were selected based on the following selection criteria: Demonstrates involvement in school and/or community activities. Demonstrates academic success. Demonstrates a unique need or special situation. We are proud of both Emily and Kyle's accomplishments and involvement in both school activities and in the community. We are excited to see them further their education, and wish them great success in their future endeavors. Congratulations Emily & Kyle!
Read more

Bryan Bulaga is back in action with the Heiser Automotive Group in Milwaukee.

As the NFL resumes operations & the Packers start their training camp, Super Bowl Champion Bryan Bulaga is returning to the Heiser Automotive Group team. Heiser Automotive Group is proud of their partner Bryan Bulaga and his starting of his 2 nd season with the Green Bay Packers. Bulaga has had a historic rookie year. On January 6, 2010, Bulaga released a statement about his intentions to skip his final season of eligibility entering the 2010 NFL Draft. With the 23rd pick in the 2010 NFL Draft, the Green Bay Packers selected Bulaga. Bulaga joins Marmion Academy Alum and San Diego Chargers OLB Larry English as the second first round draft pick from the Suburban Christian Conference in two back to back years. As part of the Heiser Team, Bryan has made a significant impact in helping prove, “Anything’s Possible.” During the first press conference Bryan   announced his triumphant beginning with Heiser. Bryan stated when asked what he plans to bring to the Heiser Automotive Group, “a
Read more