West Bend, WI, April, 2013-  +Heiser Chevrolet Cadillac proudly announces that it has won the “Business of the Month” award for April, 2013.  The award is given by the City of West Bend’s Department of Development.  It is a part of the Growing Local Business program and recognizes leadership and importance to the West Bend community.
The City of West Bend ( +West Bend, WI ) nominates businesses based on longevity, growth potential, and customer service.  Votes were tallied for several manufacturing and small businesses before it was determined that Heiser Chevrolet Cadillac should receive the award.  The local dealership has completed an extensive renovation in the past year and recently held its grand opening.


“We are thrilled to receive this recognition from the City of West Bend,” said Mary Ann Scaffidi, one of the family owners of Heiser Automotive Group. “The vote of confidence will continue to inspire our staff to exceed the community’s expectations.”  The award underscores General Motors recent ranking of Heiser Chevrolet Cadillac as the “Fastest Growing Chevrolet Dealership in the state of Wisconsin”.

Crediting the way they treat their customers and positive feedback on their pricing, General Manager, Rick Nelson accepted the award from the City of West Bend.  “Heiser Chevrolet Cadillac makes it a point to deliver outstanding service every day,” said Nelson.  “Our wide selection of the most-popular Chevrolet and Cadillac products also helps distinguish us among local GM shoppers. 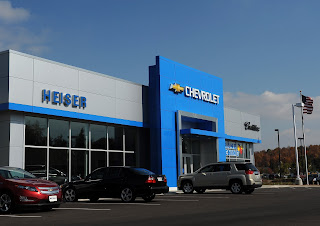