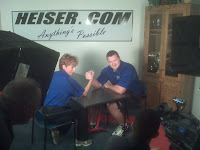 Hello Fans, With summer well on its way Heiser Automotive Group has been heating up all five Metro-Milwaukee locations with exciting news and great deals, such as the addition of Green Bay Packer player Bryan Bulaga to the Heiser team, excellent HeiserHasIt.com savings, and the introduction of Heiser to Facebook. Mary Ann Scaffidi and Bryan Bulaga Bryan Bulaga is the latest addition to the Green Bay Packer and Heiser Automotive Group teams. As a football player Bulaga has been known for excellence. One of the more athletic big men eligible for the 2010 NFL Draft, Bulaga's versatility as a prep star made him one of the most sought after recruits coming out of high school. After playing four different positions at Marion Central High School, he began his Iowa career as a left offensive guard. As one of the most talented young athletes the university has seen, the coaching staff decided to insert him into the starting lineup midway through the 2007 campaign. On January 6, 201
Post a Comment
Read more
More posts